Arthur O’Connor of Blackwater and George Kelly of Beaufort with Big Bertha the World’s Oldest Cow according to the Guinness Book of Records. Bertha belonged to Jerome O’Leary of Blackwater and Arthur’s family inherited her after his death. George Kelly now looks after her on his farm in Beaufort. Bertha now the ripe old age of 71 years was back in Blackwater for the Annual Drama Production where she made a guest appearance and SKY TV were there to document it. Bertha is no stranger to National TV or Radio; the Gay Byrne Show came live from the Blackwater Tavern in 1992 when Bertha first entered the Guinness Book of Records. Joe Duffy was in live from Blackwater while Gay joined in from the RTE Studio in Dublin. She was also featured on RTE TV and in newspapers the world over! pic Mary O’Neill 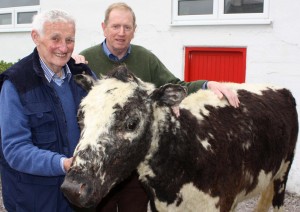