Great report in The Irish Independent about Kenmore Mart…

“Caps were flung up into the air when the hammer dropped and the buzzer sounded at the mart just before Christmas, signalling the unachievable had been achieved; Kenmore Co-op Mart had sold its 50,000th sheep, bought by Laris farmer Michael Kirwan.
A campaign had been launched on social media in the weeks leading up to the Christmas sale in an effort to boost numbers and bring them up to the coveted mark, for the first time in its history.
The idea to set up a mart in the south Co Kerry town was first mooted by a local development association in 1986, which set about doing a study on its viability.
The mart would serve the south Kerry area as well as the Berra Peninsula in Cork, as far as Bantry and Ballinger, an area of marginal, mountain land, suited mainly for keeping sheep.
The feasibility study was carried out by Stephen O’Brien from Bonine but the mart project was being pushed by locals like the late Dan Cahill, a teacher in the vocational school, and local woman Nora Finnegan, who started a share drive, and the committee that worked tirelessly to get it started.

Their next focus was to find a suitable site.
Several sites were looked at before they settled on the mart’s home at Gothically outside Kenmore.
Dan McCarthy, who has been mart manager since 2004, said the location didn’t go down well with everyone.
“The place the mart is, was the last place anyone would say there’d be a mart built,” he recalls. “There was some awful things said about it.
“There was only one byroad going up to the site and they said the only thing that would thrive up there were the bluebottles because of the nearby dump.
“People were wondering what was being done with people’s money who had invested in it.
“As it turned out, it was ideal for it. It’s near the town and there’s good access to it now.”

Shareholders
Kenmore Co-op Mart opened for business on July 11, 1996 under the chairmanship of James O’Carroll and with around 500 shareholders.
“Business people and farmers put a lot of money into it at the start,” Mr McCarthy added.
“The mart’s hinterland is the Berra Peninsula, in the middle of sheep country, and we’re one of the few marts with an increasing number of sheep. The rest of them seem to be going down.”
Most of the founding fathers are still around today, many of whom were there on Monday to join in the celebrations. The committee has also had the welcome addition of some new blood which has kept the dream alive.
But it’s had its ups and downs over the years and faced challenges that it had to fight to overcome, such as the Foot and Mouth outbreak in 2001 and it also suffered difficulties when livestock exporter TILT went into receivership.
At the time of the Foot and Mouth, the manager had to be let go because the money wasn’t there to pay him.
Serving chairman, George O’Neill, stepped into the breach, serving as manager in a voluntary capacity for the following two years.
In 2004, Dan McCarthy was appointed manager. The former bread man said he never applied for the job but was approached by a member of the committee, who asked if he’d be willing to take on the manager’s role.
The position had already been advertised twice, with no takers.
“It was some change of life,” he says. “I would have been involved in the committee down through the years and even served as secretary and chairman.
“Luckily, it has gone well for me. We have our bad days there but we’ve had some great days too.”
Nowadays the mart employs around 17 people, the oldest being drover Eugene O’Sullivan, who at 91 still has no intention of retiring.
Apart from the 50,000 sheep that have gone through the mart this year, around 9,000 cattle have also been traded in Kenmore at its Thursday cattle sale.
But Kenmore Co-op Mart is more than just a place to do business. It’s also an important weekly social gathering with many just coming along for the cup of tea and the chat.
And at the historic sale before Christmas suffolk cross lambs were making €2.15/kg, scotch sheep were selling for €1.90 to €2/kg and cull ewes made Had.
And when they did achieve the milestone, Dan says the whole place “went wild”. “Some people like to go out and win an All-Ireland in football but this was our dream, to reach the 50,000 against the odds the way farming is going and we work tirelessly at it,” he added.” 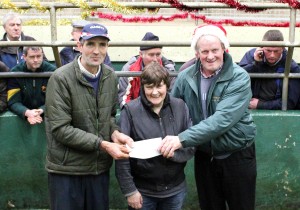