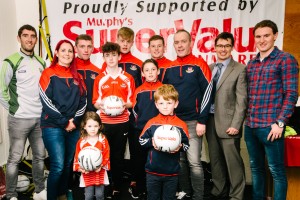 Kilgarvan being presented with their Kits for Clubs by Kerry Senior Footballers Tadgh Morley and Killian Young, and Derry Murphy.
Kilgarvan Bord Na Nog have been having great success in recent years. In 2015 they won club of the year with Kenmare and were presented with the Bob Walsh memorial shield. 2015 was also the year we had our first All Ireland Football medal winner when John Mark Foley lined out with the successful Kerry All Ireland Minor team. We had two players Christopher Creedon and Gearoid Fennessy who won All Ireland Minor B Hurling Championship medals with Kerry this year, they follow in the footsteps of Patrick O’Shea who won an All Ireland Minor B Hurling Championship medal in 2013 and are all part of Kerry’s 5-In A Row teams.
As numbers are tight at some ages we join with our neighbouring club, Tuosist for football and Kenmare for hurling. This has been very successful. This year at U16 Kilgarvan/Tuosist won the Division 1 of the East Kerry Football League and reached the semi finals of Div 1 of the County League. Also at U16 Kilgarvan/Kenmare won the Div 1 of the County Hurling League and County Hurling Championship. At U14 Kilgarvan/Tuosist won Div 7 of the County League and were runners up in the East Kerry League. In hurling Kilgarvan/Kenmare U14s reached the semi finals of the county hurling league.
Kilgarvan also have a number of players in the U16 Kerry South Football Development squads and U16, U15 and U14 Kerry Hurling Squads
We have great numbers at underage level and we are very grateful for Super Valu’s sponsorship of Balls etc, This has been a fantastic promotion for our club and ensures we have plenty footballs for our training. We would like to sincerely thank Derry and SuperValu Kenmare for everything.