Our club has been well represented in recent weeks at County level on various squads. Denise Hallisey, Templenoe lined out at centre forward for the Kerry Senior Ladies in the National League competition.
Aoife Crowley, Kenmare played at mid-field for the Kerry U14 team in their victory over Cork played in Ballyvourney recently, while twin sisters Julie & Emma O’Sullivan, Tuosist played for the Kerry U16′s in the recent Munster Championship competition. Emma at wing forward notched up a credible 2-02 against Cork while Julie at wing back had a goal against Tipperary.
While our Senior Ladies manager Colm Horgan was a selector with the Kerry Ladies Minor team in their recent win over Waterford.
Well done to all concerned! 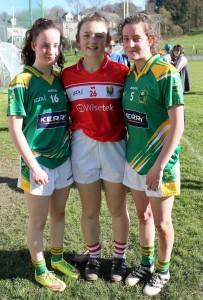