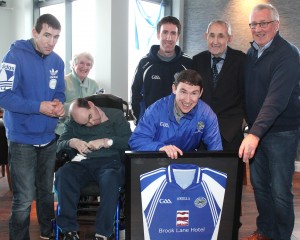 Templenoe GAA Club held a special event on Sunday 19th March to celebrate the contributions of the O’Sullivan family of Claddanure to Templenoe GAA Club.
A big crowd of club members, neighbours and friends gathered in the
Ring of Kerry Golf Club after a Templenoe home game to mark the
contributions of this popular family. Over the years, the O’Sullivans have
been ever present with unwavering support for the Club, from playing, to
acting as club officers to fundraising, their contributions have been
invaluable.
Jacko played in goal for many years, and this tradition passed on to Paddy
who played countless years in goal as well as being Club PRO for well over ten years. Sean was used mainly as a half back with Tom making the corner back jersey his own. Paul spent most of his playing career as a fast corner forward. All this effort was supported in the background by Mary who’s great work for her family has never ceased. Jacko can still be counted to turn up to the Templenoe 31 Card hampers each year.
The four lads played for Templenoe in a less successful era, but were an ever present which was vital in times when Templenoe travelled to North Kerry in Division 5 of the County League or deep into South Kerry for a B match on a Friday evening. Templenoe didn’t always travel with much more than hope of victory, but the honour and traditions of the club were always upheld. It was very important to the Templenoe players to know that the whole O’Sullivan family, and especially Sean, were able to make it up to Croke Park for the All Ireland Junior Final last year.
Colm Murphy, Tomas O’Connor and Pat Spillane made speeches acknowledging the contributions of the O’Sullivans, and made a presentation of a framed Templenoe jersey from the Club. Brian Crowley, representing the players, presented a signed team photo.
Paul O’Sullivan thanked everyone for the presentation and wished Templenoe well in the upcoming year.
John Egan sang a song about victorious Templenoe Team, All-Ireland Junior Champions in 2016 and John Rice sang The Templenoe Hare. Joan Egan also sang. It was a great evening and a fitting tribute to a great Templenoe GAA family. Templenoe GAA Club would like to thank everyone who turned up to celebrate the occasion or helped organize the event.