Neidin Bowls Club Open 4′s Competition.
Success and enjoyment went hand in hand when
on Thursday 22nd June, after weeks of organisation, both mental and very physical, we were finally ready at 10 am to welcome clubs from both County Kerry and County Cork to take part in our first Open 4′s competition.
Fortified by tea/coffee and scones, generously sponsored by SuperValu, the first twelve randomly selected teams started playing matches of 50 minutes duration, followed by the remaining teams with the winners of each match going on into the Vase and the runners up into the Bowl. This format means that every team gets to play at least two matches and thereafter it becomes a knockout competition of two halves. Play was fierce, culminating with two finals being played simultaneously (two mats of course).Team 16, lead by Neidin’s Aiden McCabe with Gisela Gloque and Phyllis Long won the Vase against Jim Dunne and his team, Mo Glover and Pat O’Brien. Team 20, Noel O’Sullivan, skip, plus John Swanick, Bernie O’Leary and Vera Shaw, won the Bowl, with Team 11, Mary Grant, Shiela Barclay, Catherine Cavanagh and Ann Casey as runners up.
Many thanks to all the local businesses who kindly donated prizes for the raffle and an extra special thanks to Geraldine Topham for her sterling efforts with the all day catering. Also all the club members, who without exception worked hard to make the whole day a success, finishing with an excellent dinner at Brook Lane Hotel. 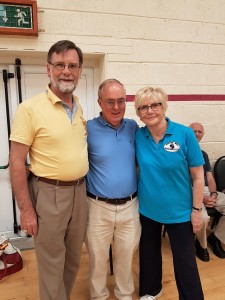