Kenmare Athletics Club left nothing to chance in pursuit of their eighth consecutive juvenile cross country title when they turned out in force for the first day of the Kerry Cross Country Championships in the Killarney Demesne on Sunday 1st Otober. As well as taking three individual titles and with a host of top 10 finishers, the club won gold team medals in every age category from from U10 through to U16, and some silver team medals too.
Luke Merrigan won Kenmare’s first individual title of the day in U10 boy’s. In U12 boys Zack O’Shea was second and Ben Merrigan third. Timothy O’Donghue was third in U14 boys. The U16 boys race was hotly contested with Owen Healy from Tralee Harriers just easing ahead of Michael O’Reilly from Kenmare in the final few metres. There was no such worry for Rhona Randles when she won the U16 girl’s title, storming home with a massive lead. The U18 girl’s title, went Alyce O’Connor.
The Kerry Athletics Uneven age, Intermediate and Masters Cross Country championships took place the following Sunday, 8th October in Currow. Once again the club swept up in the team categories. There were double titles for Luke Merrigan in U9 boys and Alyce O’Connor U17 girls. Other championship titles went to Maria Murnane in U11 girls and Abby Dunlop in U13 girls. Elissa Hussey was second U9 girls, Seamus O’Donoghue was second in U11 boys, Grace Roberts White was third in U13 girls, Tommy Arthur was third U13 boys and Michael O’Reilly was third U15 boys. It was Kenmare 1, 2 and 3 in the U17 girl’s race with Alyce O’Connor taking the win ahead of Muireann de Faoite and Caoimhe Daly. 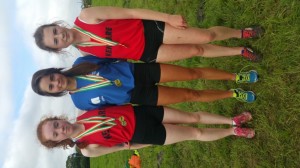