Well done to the sixteen pupils who represented Pobalscoil Inbhear Scéine in the Kerry Colleges Track and Field Finals in Castleisland on Wednesday April 30th.
In the Minor Girls, Christine McCarthy won four gold medals; she won gold in the 100m, Long Jump, High Jump and Relay. Elinor Dennison was second in the 100m and second in the Long Jump and won gold in the Relay. Cara Daly was second in the 800m and second in the High Jump and gold in the relay; and Katelyn Moriarty won gold in the relay. In the Minor Boys, Jamie Harrington won gold in the 100m and helped the Junior Boys team including Declan Hallissey, Cormac O’Sullivan and Ben O’Shea to win the silver medals in the Junior Boys Relay. In the Junior Boys, Cormac O’Sullivan was fourth in the 300m and the 1500m and Declan Hallissey was fifth in the Inter Boys Shot. Eamon Harrington was fourth in the Junior Boys High Jump. In the Inter Girls, Laura Hallissey won the 800m, Mikaela Mulcahy was second in the 800m and and third in the High Jump. Chloe McCarthy was fourth in the 100m and Mary Theresa Burns was fifth in the 100m and third in the Long Jump. The Inter Girls Relay team consisting of Chloe McCarthy, Mary Theresa Burns, Mikaela Mulcahy and Laura Hallissey were third in the relay. In the Inter Boys, Denis Cronin was fifth followed by Mark O’Riordan and the Inter Boys Relay team consisting of Liam Twomey, Mark O’Riordan, Denis Cronin and Eamon Harrington were fifth. 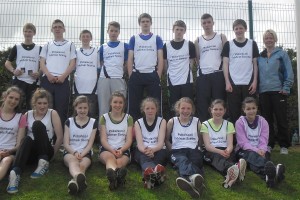