Alyce O’Connor, Kenmare District Athletic Club, and Pobalscoil Inbhear Scéine student and athlete, will long remember the outdoor track and field season of 2018.
Alyce has competed in nine championship races so far this season, placing 1st in four, 2nd in four occasions and 4th in the All Ireland Tailteann Games 1500m, just missing a medal placing by .05 of a second. Alyce’s main event is the 1500m of which she has ran the distance seven times this season. Her success in this event is remarkable and based on times incredibly consistent. Alyce has achieved three personal bests and an eighteen second season improvement with a best time of 4.42, more importantly Alyce is a championship performer and has great temperament for the big occasion. This year Alyce placed 1st in the South Munster Intermediate girls 1500m, 2nd Munster Colleges and 2nd in the All Ireland at the same event, only a tactical mistake of taking the lead 600 meters from home cost her the title. However, it was a good lesson learned and since, Alyce has won the Munster girls U-18 800m and 1500m and recently the All Ireland 1500m. In all runs Alyce had much to spare. In the All Ireland Alyce ran the last 400m in 69.10, the last 300m in 50.55 and the last 100m in 16.50, the last 300m was at a pace of 4.12. Alyce’s win in the All Ireland gained her selection on the Irish team for the Celtic games. This is Alyce’s first time representing her country and after just missing out of the selection on the Irish schools team, a well deserved reward for her. The Celtic Game’s were held in Scotland on August 4th 2018. Alyce placed an amazing 2nd with a superb run of 4.44. Luke O’Carroll of Tralee Harriers jumped 6.88m in the same event in the U18 boy’s long jump placing him second also 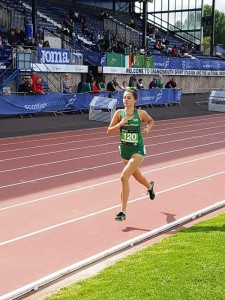