One of the many things South Kerry Development Partnership (SKDP) is known for is their approachable, down-to-earth style of engaging communities. True to form, they had called a series of public meetings at various venues in South Kerry this September, to make people aware of the great opportunities through LEADER. More than €1.5 million is left to administer by SKDP under the current LEADER programme and they are sure that the people of South Kerry can come up with some excellent and suitable ideas to spend that money and benefit their local communities and economies.
Una and Dermot Brennan’s Brook Lane Hotel hosted Kenmare’s LEADER information meeting on 27th September last, during which Noel Spillane, CEO of SKDP, and his colleague Aisling O’Sullivan Darcy, Development Officer in SKDP’s Kenmare office, showcased the workings and benefits of the current Rural Development (LEADER) Programme 2014-2020 to a reasonably sized gathering.
LEADER has been operational in South Kerry since 1991. The current programme is the 5th to be administered in our area. Co-funded by the EU, LEADER supports projects of community groups as well as private individuals, aimed at improving local economies and quality of life. In the last 27 years, a huge number of projects, large and small, have benefited from LEADER funds and the valuable assistance from local area development companies such as SKDP. In the greater Kenmare area examples over the years include such diverse projects as photography, butchery, honey production, water sports, the arts and heritage, tourism, town twinning, community centres and many more.
Noel Spillane reminded attendees of the framework and focus of the 2014-2020 LEADER programme. This time around, funding is available for eligible projects targeting Rural Tourism; Enterprise Development; Rural Towns; Broadband; Basic Services; Rural Youth; Protection of Water Resources and Local Biodiversity; and Development of Renewable Energy. Noel explained that, although the current LEADER programme officially started in 2014, government funding was actually only made available from October 2016. He said that 58% of funding currently available in South Kerry has been allocated so far. 85 projects have been assigned grants totalling €2,146,676.31. A budget of €1,543,743.92 still remains and is looking for ‘a good home’.
Each of the LEADER sub-themes has been allocated a specific amount of funding and whilst some sub-themes have seen a great number of successful applications, others have been neglected by project promoters. For instance, ‘Rural Towns’ has seen 28 projects already scoop up 99% of that sub-theme’s funding allocation. ‘Rural Tourism’ supported 26 projects to the value of 54% of that sub-theme’s budget. ‘Enterprise Development’ was also popular, 45% of that budget going to 12 projects to date. On the other hand, ‘Broadband’, ‘Youth’ and ‘Biodiversity’ have only had one successful project application each, and grants for important and topical sub-themes such as ‘Protection of Water Resources’ and ‘Development of Renewable Energy’ so far unfortunately read a big, fat zero. Considering fabulous success at this year’s Tidy Towns Competition by Kenmare and Sneem, and remarkable efforts by relative Tidy Town newcomers Kilgarvan and Lauragh, I would love to see these hard-working community groups secure some of that LEADER funding, especially to improve on the assessment categories of ‘Nature and Biodiversity’ and ‘Sustainability’.
Some of you, may recall SKDP’s Seán de Buitléar expressing his frustration at the slow and inefficient LEADER application process back in June of last year, after government had ‘improved’ the system. Asking Noel Spillane about this, I was glad to hear that he thought the timeframe has improved vastly since then. Previously it could have taken 12 months for a project promoter to get the green light, now it is more like 5-6 months, keeping the momentum going so much better. Aisling O’Sullivan Darcy added that it is important to get the application documentation right on the first attempt. She said, this is exactly what she and her fellow Rural Development (LEADER) Officers are there for. Aisling is happy to be approached by potential project promoters at the early planning stages and will work with them to submit their Expressions of Interest and, hopefully, later develop their applications for funding.
If your brain is brimming with suitable and realistic ideas, and you ask Aisling to work with you on your documentation, your project could be assessed as early as January 2019. With her help, your Expression of Interest could result in an invitation to submit a full application, and this could be ready and prepared for SKDP’s Evaluation Committee’s January meeting. The Committee sits five or six times per year. Once a file and report on a project is approved by Kerry County Council, the Evaluation Committee goes ahead with evaluating and scoring the application. Successful applications are then recommended for funding and will again be reviewed, for instance by Pobal that administers and manages government and EU funding. In an ideal case, a contract for funding is then offered to the project promoter following which project activity can begin.
It is important to note that a LEADER grant cannot be given retrospectively, and payment of the grant is only made after the corresponding expense has been incurred. For large projects, up to five phase payments can be made, helping with cashflow. In other words, a project promoted must advance costs by way of a bridging loan or similar, in addition to having the required matching funds in place.

Noel and Aisling acknowledge that the entire process can sound rather confusing and very complicated. However, Aisling emphasised very genuinely that she and her colleagues are there to explain, advise and make everything as straight-forward as humanly possible. Her strong recommendation is, though: Be thorough, be prepared, and give yourself time. And: Don’t be put off! She will help! 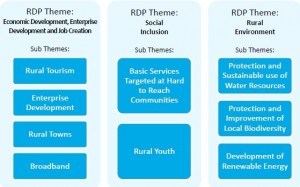