May and June have brought us some more 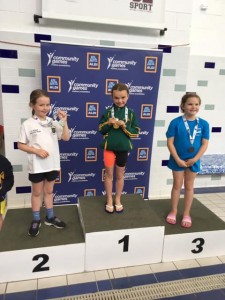 !
Our junior swimmers attended their last Munster Meet 1 of the year in Cork at the end of may, to knock off chunks of personal bests in their swim events and some great dives were seen by the swimmers even though they rarely get to practice off blocks! Well done to the team of Ciara Foley, Cillian Meagher, Saoirse Foley, Alex McCarthy, Conor Durkin and Amy Arthur, with a special mention to Amy Arthur who won a silver in 50 back and her first Meet 2 time!
Four of our swim club members represented Kerry in the Community Games All-Ireland finals in May. Only first place in Kerry finals go to the All-Ireland, so it is an amazing achievement that all four swimmers who went to UL for the finals made the podium! Jessica Merrigan Gold in the freestyle, Luke Merrigan Pewter in the breaststroke, Joshua Foley Silver in the backcrawl and Tommy Meagher Silver in the butterfly.
Next the performance swimmers headed up to UL Arena for the Munster Connacht long course Championships. This is a high level gala where swimmers can qualify for the National division 1 and division 2 galas. Well done to Tommy Arthur on great personal bests and Holly Arthur on securing her first national division 2 time! Also Josh Foley, Ben Merrigan and Tommy Meagher achieved some division 1 times. Well done to Tommy Meagher on his silver in 100fly and Ben Merrigan on silver in the 1500 freestyle.
The weekend after that they headed up to Cork for the Michael Bowles division 2 qualifier gala. Some more amazing personal bests by everybody and over the two days 21 medals were collected! Well done to the girls, Ciara Harrington and Holly Arthur on securing more division 2 times and the boys had great success in the two relays they entered coming 3rd in both.
Also the club is proud to say it has three sub 30 second swimmers in the 50free, Tommy Meagher and Ben Merrigan join Joshua Foley who achieved it earlier in the year.
New club record now of 5 National division swimmers, with 30 events between them! Best of luck at both divisions to be held in UL Sports Arena and the National Aquatic Centre in July.