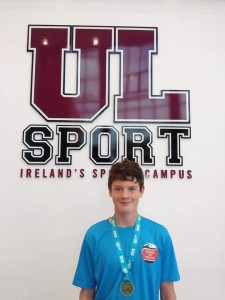 with our division swimmers competing at National division 2 in University Sports Arena in Limerick and at the Irish Summer Nationals division 1 held in the National Aquatic Centre Dublin.
This is the first time ever for Kenmare Bay Swim Club to have five national swimmers with 30 events between them. First in Limerick our three division 2 swimmers, Holly Arthur, Ciara Harrington and Tommy Meagher represented our club proudly with fantastic attitudes and swims over the four days. Holly competed in two events and knocked off an impressive 6sec in her 200 backcrawl. Ciara had five events and secured personsonal bests in all her national events. Tommy had six events and reached finals in four of them winning Gold to become National division 2 Champion in the 400 freestyle.
Next up to Dublin to make history for our club with three athletes Josh Foley, Ben Merrigan and Tommy Meagher competing in the Irish Summer National division 1. Tommy had two fly events and secured great times in both, Ben had eight events over the five days and ranked very well in all of them, winning a Bronze in the 1500m freestyle, whilst Josh reached the finals in all of his seven events and won three Bronze medals in 200 backcrawl, 100m backcrawl and 200m.
So that’s a wrap with five division medals coming home to Kenmare. What these swimmers have achieved out a small 20m hotel pool defies belief! The club, coaches and parents are extremely proud of all its swimmers over the past year, and so say all of us.