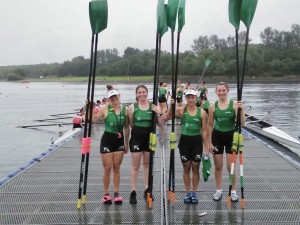 is based at the Pier in Kenmare and have close to 80 junior and adult members. The Club offers recreational and competitive rowing to all ages in singles, doubles and quads and we train on the water throughout the year. We also have our own gym, for times when it is more beneficial to exercise on dry land!

The National Rowing Championships were held in mid July, at the NRC in Farran Woods. the Club was well represented by Eimear Crowley, Tommy O’Sullivan, Ellen Harrington, Leon O’Sullivan, Georgia O”Brien, Tom Kelly and Rowan Glynn Johnston. Over 1200 crews from 60 clubs travelled from all four provinces to take part in the biggest event in the history of Irish rowing. All the Kenmare rowers did so well, having trained hard both on and off the water throughout the year, under the watchful eye of their coach Noel Casey whose rowing knowledge and years of coaching experience are second to none. Tom Kelly won the Men’s J18 single sculls and Georgia O’Brien won the Women’s Senior single sculls. We are very proud to have 2 National Champions, a really amazing achievement. In the Men’s J16 single sculls Rowan Glynn Johnston came 4th in the final. 71 young scullers entered this event, the largest entry of any race in the Championships history which is a very positive sign for the future of Irish rowing.

Following their success at the Championships Georgia O’Brien and Eimear Crowley were selected to represent Ireland at the Home International Regatta in Strathclyde, Scotland on July 27th, where junior and senior crews from England, Ireland, Scotland and Wales competed. Eimear rowed in a double and a quad, and though the Scottish crews dominated on the day, it is a great achievement for Eimear to be selected again to row for Ireland, having competed at the Coupe in 2018.

Tom Kelly who trialled throughout the season was selected to go to the Coupe de la Jeunesse in Corgeno, Italy from August 2nd-4th. 14 European countries were represented over 2 days by teams of athletes who are 18 or younger. Tom rowed in a quad with the other top scullers from the Championships, Andrew Sheehan Lee RC, Finn O’ Reily Skibbereen RC and Rory O’ Neill Castleconnel RC, and just missed out on a medal position with Italy, Spain and Great Britain coming in ahead. These Regattas are often the first taste of International rowing. In Italy the HP Irish team who were on a training camp preparing for the World Championships later in the month popped over to cheer on the younger rowers, many of whom had competed at these events in the past.

Though Georgia couldn’t make to the Homes this time due injury, she named her boat after Noel, a fitting gesture considering the he has been with her from the very start of her rowing journey, with wins at the Coupe in 2018 and the Homes in 2017, and now National Champion.

Regattas in Bantry and Ahakista are next on the calendar and we hope that some of the junior and more senior crews will be ready to take part in those in the new Offshore Quad. We are looking for a name for the new Quad so please follow us on facebook and leave your suggestion in the comments.

All the members of Kenmare Rowing and Boat Club past and present were deeply saddened by the untimely death of Flor O’Sullivan Batt. He was a true gentleman, a great friend and supporter of our Club and will always be fondly remembered. We extend our deepest sympathy to his family.