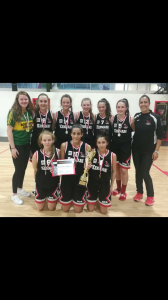 The U16 D1 girls had a flying start to their season, winning the first Fr. Matthews Invitational Cup in Cork earlier this month. The girls had a nail biting semi-final against St. Marys, winning the game by just ONE point after trailing by 12 points in the last quarter! A fantastic show of sheer determination and unbelievable teamwork by these young ladies ensured they bagged the ‘W’ in the end. After their well-earned win in the semi, the girls continued their winning streak in the Final against a very strong Liffey Celtic team. All three games were won, meaning they qualified top of their pool. Well done to the girls and to their coaches Monsa and Caroline.

We had James Weldon, Irish International Basketball Coach, join us for a coaching clinic on Saturday October 5th. He worked with the under 14 girls, who were a credit to their coaches and their parents for their attention and hard work throughout the session. Well done girls! Our coaches learned plenty of new and exciting drills to pass onto their teams. A warm thank you to everyone who showed up on the day and got involved with the activities.

For the first time in the history of the Kenmare Kestrels Basketball Club we have our first U17 Boys basketball team. Best of luck with the season ahead lads! Also our first U10 basketball blitz of the season takes place on October 20th in Tralee. Finally, a HUGE congratulations to Tania McCormack on receiving her first International Cap alongside her teammates. Tania is the first club member to achieve this. However, looking at the talent coming up through the Kestrels ranks, she definitely will not be the last. We are all very proud of Tania and her achievements so far, as are her family Martin, Monsa and Julia.