Everyone is talking about climate change and we all know it is a serious issue, but nobody thinks that they can make a difference themselves. Or can we?
Earlier this year when discussing ideas for the ‘SEAI One Good Idea Competition’ the students at Sneem National School discussed ways that they could help the planet by making little changes in their daily life. They realised that they all could make one small change that would make a huge difference; shopping and eating in season.
Different fruits and vegetables can only grow at certain times of the year which means that certain fruits and vegetables should only be in shops at certain times of the year. But have you ever not been able to buy strawberries in winter? When fruits and vegetables are out of season, they are injected with pesticides and chemicals that are terrible for your health, and LED grow lights are then used as artificial sunlight which burns so many fossil fuels which are killing the environment.
The fruits and vegetables are then imported into Ireland from the other side of the world, which emits more CO2 than you can count. For example, a recent survey that we conducted in fifth and sixth class in our local supermarkets showed that raspberries are out of season and yet they are still in shops. These are coming all the way from Egypt, 2,707 air miles away! That is emitting 143,471 pounds of CO2 just in one trip.
The price of the produce that is imported is more expensive than it would be if it were in season so if you buy and eat in season you are automatically buying Irish produce, which is benefiting your pocket, your health and your planet.
The students, who are very excited to be one of five schools chosen to compete in the regional finals in Cork on February 24th, are trying to convince people to take their pledge to do their best to eat and shop in season.
They can make a difference and so can you!
The students are making a keyring, for sale in the few weeks, which will help you to shop in season. Please get in touch if you want to buy one.
“I pledge to eat and shop in season”
The students at Sneem National School are taking the pledge. Are you? 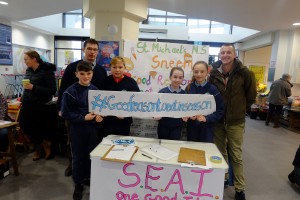