Kerry County Council paid tribute to the county’s heroes and achievers at a gala awards ceremony in the Great Southern Hotel, Killarney recently. The Annual Kerry County Council and Municipal District Awards were presented to teams, organisations, groups and individuals who had achieved notable success and brought distinction and honour to their communities and their native county.
The awards were presented by Cathaoirleach Niall Kelleher to County Council recipients and by the respective Mayor and Cathaoirligh to recipients across the five Municipal Districts. Amongst those who received awards were Rockmount Care Centre, Kilgarvan and Mike Moriarty who rescued two tourists from drowning in Valentia. 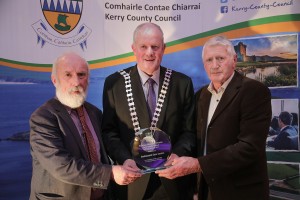