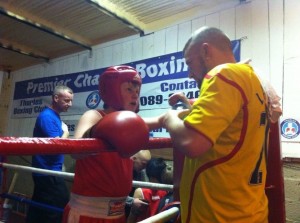 Barry Healy started his journey in Kenmare Holy Cross boxing club in 2013 at the age of 21 and his love for boxing was evident from the start. We had the club for a year and a half and it closed unfortunately but that wasn’t going to stop Barry! Subsequently Barry got in contact with Sean O’Leary in St Margaret’s Amateur Boxing Club in Tralee where he continued his journey from August 2014 to August 2015 before the bright lights of London called him.
Through a contact of a contact in Islington Amateur Boxing Club in London, one of the best clubs in England, Barry moved there in August 2015 working odd jobs in restaurants and training underage kids in the club after work. He eventually achieved his level one and two amateur boxing badges but with long hours in the restaurants it was hard to commit fully to the boxing so he decided to quit working and fully commit by starting to coach senior fighters.
By the age of 25 Barry had seen great success in tournaments, set up a training camp in Sri Lanka for underprivileged kids, achieved his professional boxing badges, been in the corner as a coach for his first professional fighter and achieved his life long dream by being granted his professional boxing coaching license by the BBBC.
By 2017 Barry was coaching professionals in Old Street Boxing Club and coaching in Islington Boxing Club, before becoming in 2019 a full time professional boxing coach and moving to Churchill Boxing Club where he was contacted by a professional MMA fighter called Claudio Silva asking him to be his boxing coach as part of his team for his upcoming UFC fight which took place in Fight Island in Abu Dhabi in November 2020.
Barry’s dream is alive and only just beginning, and all from the roots of a small club in Kenmare in 2013.