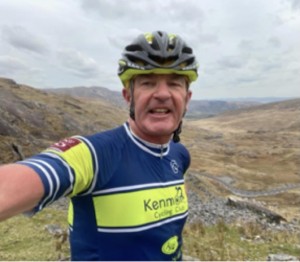 This was an extremely tough, unsupported ride of 2422.5 kilometres along the wild Atlantic Way, and Fenton had been training hard, working with a cycling coach who was monitoring, training, and setting weekly schedules for strength and endurance much needed for this challenge. During these preparations Fenton covered 12,000 kilometres and 120,000 metres of climbing and spent at least an hour a day on strength and core work. He also combined training with a new diet losing 5 kilos in weight which would have a significant advantage on the climbing aspect of the race. Fenton at the start of the race was going exceptionally well with a steady 210km and 3,000m of climbing. Easing into it and looking forward to the coming days with his rouleur Anniemiek Stegehuis who was excited to be riding with Fenton on this TAW 2021 Bike Ride from Derry to Cork City. The pair had everyone at Kenmare Cycling Club, friends and colleagues at FC Group all cheering them on from start to the finish!
There were two courses for the race a long or short course and Fenton decided to take on the long course as this was more scenic and went to some of the best places. The objective was just to finish the race but of course you go as fast as you can.
Fenton’s plan was to take it steady for the first couple of days then start pushing from there. The key was food and hydration so there was a strict plan for intake covering 6,000 calories per day together with recovery after each day combined with proper rest every night in a B&B where at least 5 hours sleep is required to be able to recover.
Fenton felt strong throughout the race and got stronger as it progressed. After day three his body adjusted to the extreme activity and compensated accordingly. On the third day Fenton had a 300k push out of Donegal onto Ballina and had already covered nearly 800k and 10,000m of climbing. These were some of the most difficult sections of the race, so Fenton was pleased all was going to plan at this stage.
By the sixth day Fenton had a 310k push from Cashel to Lahinch, having covered over 1500K and 17,000m of climbing. They took the Ferry the next day to Tarbert and entered the Kingdom of Kerry! This was going to be a big psychological moment for Fenton getting there in good shape as was entering his home training ground where he lives in Kenmare and knows every part of the route of the 800k run in to the finish in Cork.
After 260k covered and 1730k in total Fenton and his teammate Annemiek arrived in Dingle the evening of day seven. They were passing through Kenmare and all the local towns where there were tremendous support and encouragement from Fenton’s local cycling friends and family.
Fenton pushed through to complete another tough 230km on day eight and arrived in the Schull area, the next day seeing him reach his destination in Cork City. He completed day nine of the TAW race having covered 2300k and 27,000m of climbing. The final day of the race saw him hit Mizen Head early, the most southerly point in Ireland, having covered the most northerly point at Malin on the first day with just over 200k to finish in Cork!
On day ten and the final day of the race Fenton completed his 2422km cycle from Derry to Cork along the Atlantic coast. A tough route and a fantastic achievement!
As Fenton told us, “It was a huge relief and with much emotion to have completed the TAW Race around Ireland. And I would like to thank all my cycling buddies in Ireland, Ghana and Cyprus for their support for this tremendous cycling journey.” Fenton also extended a big thank you to everyone, including those who kept him in good shape and away from injury. It is all much appreciated, especially all the private messages received throughout this adventure.