Huge congratulations to Seán Coles-O’Sullivan, Ardea West Tuosist, who has been awarded best blue cheese in Ireland, taking Gold in Blas na hEireann 2021!
Sean told us, “I’m a small producer based on the side of Knockatee mountain, producing a selection of cheeses for some of the country’s finest hotels and delis. In the competition I was up against Ireland’s supermarkets and biggest cheese companies.
“The win was a complete shock to me as I am just a small local artisan producer working in the shadows of the big boys. My cheese is hand produced and crafted by myself in an old farmhouse building looking back down the bay into Kenmare.”
Knockatee Natural Dairy’s signature cheese ‘Kerry Blue’ is not for all as it is strong in taste but extremely creamy with a good punch at the end. It stands out from the others as it is coated in an orange wax, when opened you get to see the rich cheese with its strong blue veins.
Sean continued, “I’ve been making cheese since 2017, having taken over the business after a year’s apprenticeship with Peter Ireson, and I’m still making the cheese at his creamery. I will be producing cheese here until the end of the month when I will be downing my apron for the season as I only make cheese when the cows are out to pasture. In the spring I will be starting up in my new creamery located in Ardea which is much larger in scale and more ergonomic.”
Sean was accompanied by his son Hugo to Dingle last week to collect the award and they celebrated on their return with Sean’s grandmother Maureen O’Sullivan outside the family’s post office. 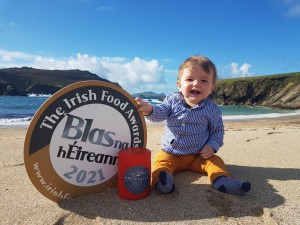