Seaweed Mill Press in Tuosist is the publisher of ‘ 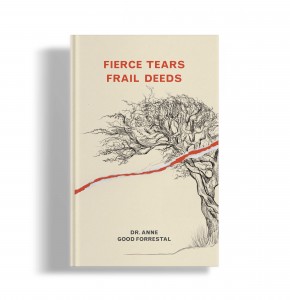 ’, by Dr Anne Good Forrestal, a Tuosist based writer.
The official Decade of Commemorations will draw to a close next year and has led to an outpouring of new accounts and new understandings of Ireland’s War of Independence. This new book, to be launched in Kenmare in December, adds to those shifting perspectives by telling the story of a family which was actively involved in many aspects of the changing Ireland most especially during 1922. This historical novel, set in the period between the signing of the Treaty (1921) and the outbreak of Civil War (1922), tells the story of the author’s grandparents both in Ireland and in America.
While researching for the book, the author, now based fulltime in Tuosist, discovered a number of intriguing Kerry connections and the book asks what lessons can we still learn from that period of chaos and conflict and from those unintended consequences of the Treaty compromise which still impact on Ireland today.
Fierce tears, frail deeds is available now through Kenmare Bookshop, LettertecBookStore.com and seaweedmillpress@gmail.com